虎穴寺 （Taktshang Goemba or Tiger's Nest Monastery），扶摇凌驾于高出帕罗峡谷900多米的悬崖峭壁上，是不丹王国最著名的佛教圣寺。这里是传说中8世纪时，印度高僧莲花生大师(Guru Rinpoch)在不丹冥想的地方。虎穴寺也因此成为了受到全不丹信徒顶礼膜拜的圣地，并被誉为世界十大寺庙之一。虎穴寺始建于1692年，在1998年的晚上遭遇了一场来历不明的毁灭性火灾。之后虎穴寺一度曾严禁普通游客进入，即使是教徒的进入也被严格限制。经过不丹全国人民的共同努力，虎穴寺于2005年重建完成并重新向世界展示。虎穴寺是一个集风光与艺术于一体的寺庙。寺内每个建筑都有一个阳台，可欣赏到优美的帕罗河谷风景。整个院落建筑群由四个主殿堂和居住区域组成，它们大多依山据地而不规则地修建。远望去，虎穴寺如同攀附在峭崖上的一只壁虎。要进入供奉莲花生大师和千手观音佛像的主洞穴，需要通过一个狭窄的通道。在黑暗的洞穴中，闪烁着酥油灯，你可以看到踏在雌虎之上的莲花生大师的怒形化身多吉卓洛，这便是当年莲花生大师来此修行的描述。此外，这间佛堂中还藏有一幅优雅的千手观音图像以及数十个菩萨像。
Taktshang Goemba，situated 900 meters on a cliff overlooking the beautiful Paro valley, is the most famous temple in Bhutan.It is said that this temple was the original location where the Indian Guru Rinpoche meditated. He is considered the founder of the Tibetan Buddhism's Ning-ma sect, one of the four major schools of Tibetan Buddhism. Thus he is one of the most respected gurus in Tibetan Buddhism.According to the ancient stories, in the year 747, Guru Rinpoche flew on the back of a female tiger demon from Tibet to a cave in the Paro valley. He meditated for three months and afterwards was able to tame the demon which possessed the tiger. After the tiger had been tamed, the sanctuary at Taktshang Goemba (which translates into Tigers lair) was built and used for worship by Bhutanese adherent to Tibetan Buddhism. It is said that the Tigers liar can wipe off any sins that one has committed. Many people who visit for the first time will vomit for no apparent reason. The locals have come to call it "the excretion of sin and rebirth of a brand-new body".Although the site had been used for worship for many centuries, the temple complex was officially built only in 1692. However, on the night of April 19th, 1998, the temple caught fire and the many priceless artifacts and painting were destroyed. After the fire, the temple forbade tourists to visit and even those that worshiped Tibetan Buddhism were given limited access during the time of reconstruction. With the joint efforts of the Bhutan people and their government, the Tigers lair was rebuilt and reopened to the world in 2005.The Tigers Nest is a temple living in tandem with scenery and art. The ancient cypress trees are dozens of meters high with hanging moss. A picturesque waterfall hangs in front of the mountain, the water dripping through the layers of rock as it falls to the valley several hundred feet below. Inside the Temple, each floor has a balcony that allows one to admire the beautiful Paro river scenery and to have a moment of quiet reflection. 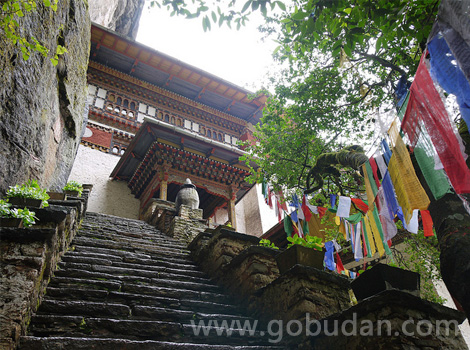 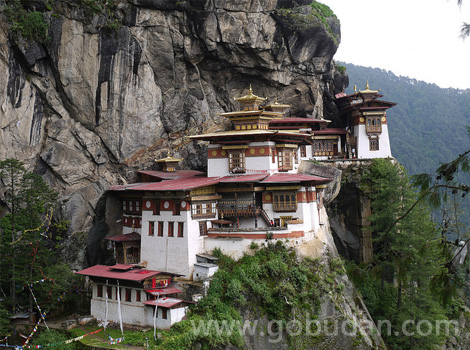 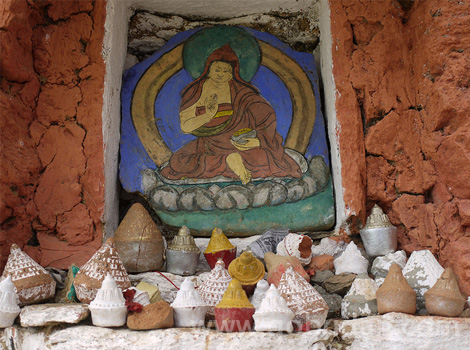 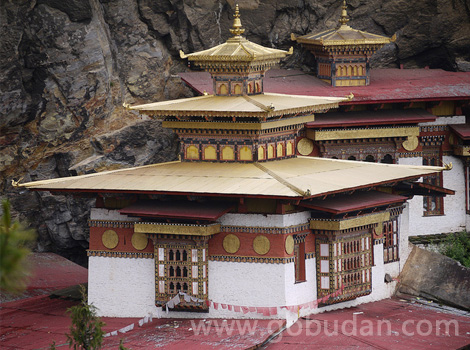 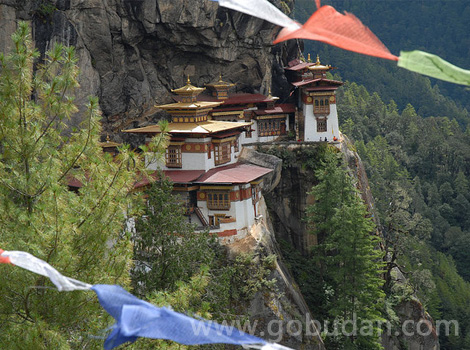 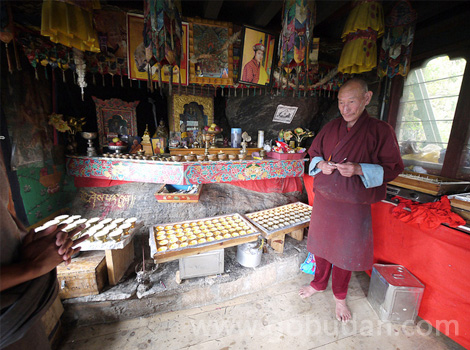 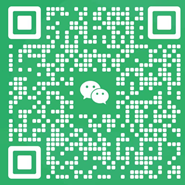